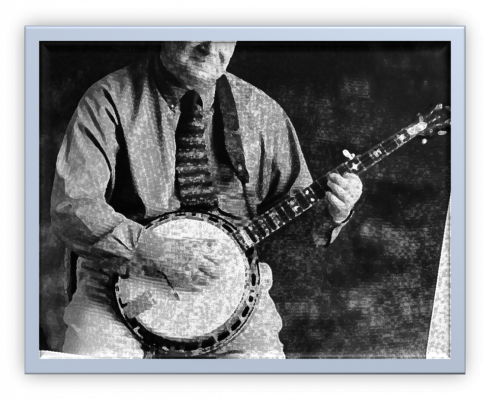 Have you noticed that? I don’t think I’ve ever seen somebody playing the banjo that didn’t look absolutely giddy and gleeful while they were doing it? It’s kind of odd, I think.

John Fogerty and Paul McCartney notwithstanding, serious guitarists pretty much never look happy while they’re playing. For the most part, they look really damn miserable…either clinically depressed (see Neil Young), or pissed off (see Bruce Springsteen) or completely out of their minds (see Keith Richards)…with their faces all contorted and twisted as if they’re stuck in the middle of an extremely complicated bowel movement.

I don’t imagine that playing the banjo is a whole lot easier than playing the guitar. In fact, in many ways it seems quite a bit harder. For starters, banjos have that weird extra string that only goes about two-thirds of the way up the neck. Then you have to use those creepy little Freddy Kruger claws to play the stupid thing. And then there are all kinds of odd pieces and parts inside (aka “doohickies”) that each seem simultaneously essential and largely irrelevant.

This could just be a symptom of the kind of music one might play on a banjo. There aren’t a lot of ballads or dirges written for banjo. It’s not appropriate for flamenco or death metal. I guess the banjo is primarily used for music that seems kind of inherently cheerful and high energy. I guess that might be the simplest explanation.

But I actually have kind of a different theory about this…probably more than a little controversial…but I’d like to suggest that playing the banjo might be sexually arousing…particularly for men. Sounds pretty crazy I know……but let’s take a moment to analyze this…indulge me please…

Firstly, have you ever even seen a woman play the banjo? I haven’t. Definitely not. I don’t mean to suggest that I’ve done extensive research on the subject. I certainly haven’t gone back through the archives at the Grand Ole Opry to verify this as any kind of factual statement. And I’m absolutely certain that there are no rules that might prohibit it. And I would be virtually guaranteed to mortally offend the League of Women’s Banjoistas if I were to proceed much further down this path and suggest that women were incapable of playing the banjo…thus making myself into a rather obvious “banjeauvinist”.

So, why don’t we just assume that there are a number of very capable female banjo players in this world…and move on.

Next, ponder the fact that there are basically two kinds of banjos…hollow-backed and solid-backed. And when one plays the banjo, where would the big round part of the lollipop-shaped instrument (some might say “phallically-shaped”) normally be positioned? Directly over you crotch…am I not correct?!

Needless to say, I do not play the banjo…never even held one in my hands…but my understanding is that a big part of the sound produced by a banjo is created by the vibrations caused by the combination of the strings and the “skin” that covers the round “head” of it. Interesting…especially when you consider what’s specifically concealed from view right behind it.

And the hollow-back version seems like it might be especially good for hiding certain kinds of protruding objects…objects that might spring to life as a direct reaction to particular bio-physical stimuli…things that are probably best hidden from view while performing in front of a large live audience or a TV camera.

On the other hand, the solid-back version of the banjo is actually created by attaching a very clever, sound-and-vibration-amplifying device to the backside of the instrument…a device known affectionately as a “resonator”. A rather suggestive name wouldn’t you say? Something that a female “banjoista” might thoroughly enjoy? So maybe there are a lot of banjoistas in this world. Clearly, more research needs to be done!

Please understand that these are just innocent observations and postulations offered up by a person with a rather contorted mind…and this is nothing more than a perfectly well-intentioned attempt to explain why all the banjo players always look so fucking happy. Of course…it might just be that they really enjoy playing the banjo. Maybe I’ll write a letter to Steve Martin and ask…